Here in my little slice of Canada, it’s begun snowing again, in what I can only assume is an entire country hyped up for Season 8 of Game of Thrones. Winter has come back to Nova Scotia.

Recently my dear friend and amazing writer Cyndi of Keeping Her Keys spoke about the magic and witchcraft types within the Game of Thrones world at a broad level. I want to dig into what isn’t known. And that’s most of the magic of the north.

In this installment I’ll get into Greenseers and Wargs. Let’s journey down this rabbit hole, shall we?

Greensight, and those who have it.

Greenseers (those with the Sight) are the wise men of the children of the forest. They were the people who carved the faces into the weirwoods (the trees I would say are most like a world tree for journeying through location and time).

Where wargs (skinchangers) are quoted at about 1 in 1000 men born skinchangers, only 1 skinchanger in a 1000 are born greenseers. Most of these are children of the forest, and some of the Crannogmen of House Reed.

In ASOIAF books, green seers and green men are more clearly differentiated. There is only one green man left when Bran goes north of the wall, and that’s Brynden Rivers, decaying, and rotting, feeding the Weirwood while it also feeds him. At his death Bran is the only remaining Green Man. Greenseers however have an unknown number within the Children of the Forest, both beyond the wall (3 score quoted in the books at the cave with Brynden Rivers), and an unknown number at the Isle of Faces, with the largest concentration of weirwood trees. With both greenseers and the green men, blood sacrifices are made in some form to the trees to maintain their abilities, and many of the Northerners also offer blood sacrifices to the trees.

Relating this magic to modern witchcraft, the most obvious connection is through ecstatic journeying through a world tree to look into your past, present, and future for divination. If you’re into pop culture magic, try a meditation where your world tree is a Weirwood.

This video from the GoT official page speaks a bit about the differences, and you could of course go down the rabbit hole I have with theory videos. 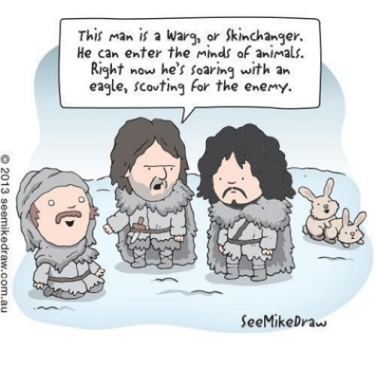 More common than Greenseers, the Wargs are people who enter into the consciousness of other animals and merge with them through control. This technique of shapeshifting isn’t foreign with the world of witchery and ecstatic indigenous practices, but in ASOIAF it has the high fantasy blended in.

Beyond the wall, these abilities are still known and understood well. Varymir Sixskins is one of the most famous wargs north of the Wall, and controls 3 wolves, a shadowcat, a snow bear, and an eagle. He speaks of the discipline needed for warging, and warns of what can happen with your mind.

“Once a horse is broken to the saddle, any man can mount him. Once a beast’s been joined to a man, any skinchanger can slip inside and ride him. Orell was withering inside his feathers, so I took the eagle for my own. But the joining works both ways, warg. Orell lives inside me now, whispering how much he hates you. And I can soar above the Wall, and see with eagle eyes.” —Varamyr, to Jon Snow (A Storm of Swords, Chapter 73)

Throughout the books, the type of creatures that can be warged into are reviewed – dogs are one of the easiest creatures to warg into, where wolves and direwolves are harder to warg and control without a bond. Even with a bond, direwolves cannot be tamed as we see with most of the Stark’s direwolves that roam on their own. However, the Stark children are also undisciplined wargs with merely uncontrollable abilities (Bran being the exception). Birds are also mentioned heavily in book more than the show, and one warg north of the wall in particular is killed while he is in an eagle. Brynden Rivers (the Three Eyed Raven) wargs into crows frequently to track the Army of the Dead, which has now become Bran’s job.

When the human is killed while the mind is in animal form, eventually the beast takes over again unless that mind can continue to transfer, ultimately going mad in the process. Among the Northern people, there are ethics and codes of conduct on warging that help prevent the dangers of warging.

So what’s the magical lesson of warging? Be mindful of your ego and controlling anothers’ mind, and journeying so long you forget who you are. In modern witchcraft, this is more related to grounding appropriately in the physical world after ecstatic magickal practice.

Both of these types of magic are related to inherent abilities that can be further trained, and that is certainly a reminder for our own magickal practices. Inherent psychic abilities can become more fully understood and we can seek mastery through study and practice, circling back again and again through the beginner mind.

Until next time, when I’ll get into the Starks, who really need to remember their magic before the end of the season. Stay warm in the long night everyone!